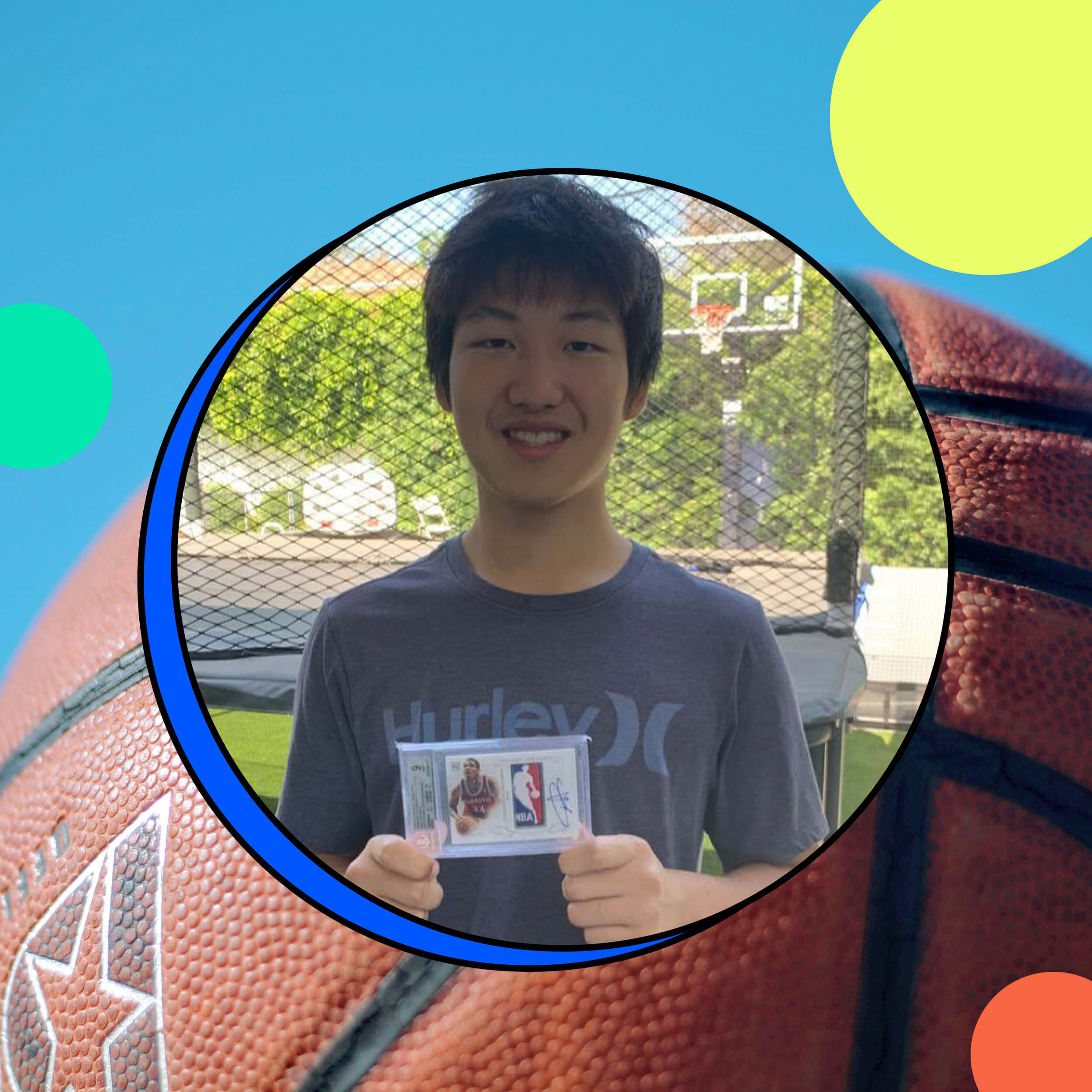 That’s the face of Andrew Park, a high school student who recently sold a basketball trading card for close to $2 million.

That’s the whole truth and nothing but the truth, so help us God ✞

This 16-year-old spilled the beans to Business Insider, and we’re here to share it. (Cuz unless you can outsmart the paywall, you’re SOL 😂)

Check out the real Gen Z microentrepreneur Andrew Park’s story below, and take a few pointers from him in how to rake in some substantial cash during these uncertain times.

Who Is Andrew Park?

Andrew Park is a 16-year-old 10th grader who recently sold a basketball trading card for over $1.81 million, breaking records and craning necks 👀

Yes, he’s still in high school. Yes, we said recently (September 2020 to be exact), and yes, a sports card sold for close to $2 million.

Anything else you want clarified? 😆

But just so we’re on the same page, let’s phrase it a different way…

This high schooler grossed more than the majority of people do in THEIR LIVES with just one basketball card in the middle of a worldwide pandemic.

Don’t Leave Me Hangin’. I Want Deets On The Sale

It started in 2017 when Andrew bought Giannis Antetokounmpo’s basketball trading card for $40,000 at the National Sports Collectors Convention in Chicago.

(These card traders are hella serious, yo. And the industry is only going to grow more with the current sports trading card boom 🚀)

Anyways, he admitted that while yes, he was looking for Antetokounmpo cards, he wasn’t expecting to buy his best card.

"The card is a one of one, and it is Giannis' best card ever produced," Andrew told Business Insider. "It features a 'logoman' patch and is from the highest-end basketball product (National Treasures) that Panini (the card manufacturer) produces."

Anyways, he believed in the potential of Giannis and wasn’t even mad that he was (unfortunately) overcharged.

“I knew that even if I overpaid at the time, it would not matter in the future because I believed Giannis would continue to improve, which would cause his card values to increase."

And increase they did 📈

Doing the maths, he profited $1,770,000 from just the ONE recent Antetokounmpo card sale.

Was It A One-And-Done? Was That His Only V?

Andrew’s been making serious cash from his card collections since he was 11 years old.

Like, the age boys and girls start growing pubes and break out in acne, this kid was working like a boss 👨🏻‍💼 (👈🏽 without the stache, ofc).

Even though it seems like it, all his sales aren’t in the hundreds of thousands.

Plus, he said that since he first started, buyers’ pockets are getting deeper (a.k.a. more 💰).

"In 2015, it was unheard of to see a card sell for seven figures unless it was a vintage card, such as a Mickey Mantle or Honus Wagner," he said. "However, in the past few months, at least four modern-day cards have sold for over a million dollars, with many more cards selling close to a million."

In total, his net card sales are nearly $2.8 million.

And need we remind you he hasn’t even graduated high school yet? 😂

OK, That’s Cool And Everything, But How’d He Get Into All This?

Like our other Real Gen Z Microentrepreneur Siddh Akolia, Andrew had a history in buying and reselling.

But this time it’s not sneakers 👟

His journey began as a preteen trading Pokémon cards.

"I would play with the Pokémon cards with friends at school," Andrew said. "Over time, I became less interested in playing games with the cards and more interested in collecting them."

"I realized then that buying and selling trading cards could become a potential business," Andrew said.

That’s when he moved into the world of sports trading, starting by purchasing cards from his fav baseball players – like Mike Trout & Clayton Kershaw 🏟

Eventually, he expanded into other sports, such as football and basketball.

And well, the rest is history.

Lessons To Be Learned From The Gen Z Microentrepreneur Andrew Park

So, now that you know how wildly successful this kid is, it’s time to take some pointers from him, Boost-style 😎

👎🏽 Andrew doesn’t buy and resell cards on a whim.

👍🏽 This young microentrepreneur invests “at least a couple hours a day” reselling and researching trading cards.

"I read forums and search eBay for any great deals," Andrew said. "I also have to follow sports news to read about any upcoming players or major injuries."

So, take a page from his book 📖

❌ Don’t assume your work is done when you have your product created and in the market.

✅ Do keep up with the industry, especially since your next million-dollar opportunity could be waiting for you…

Of course Andrew networks 😂 Would you expect any different?

He thinks it’s “one of the most important skills in order to resell trading cards.”

Whether he’s on his Insta, his website, or Blowout Cards Forum, Andrew vibes with collectors and enthusiasts around the world to stay in the loop and get business leads 🌍 🤝

(His go-to was the National Sports Collectors Convention, but that was canceled in 2020, for obvious reasons.)

Truth is, opportunities won’t always come knocking at your door 🚪 A lot of times you have to actively seek them and nurture relationships to make them happen 🌱

Think of it this way: Networking is like a muscle. The more you work it, the stronger it’ll become 💪🏽

Anyways, if you’re a bit shy in the networking scene, no worries. We gotchu.

Here are 33 networking tips you can easily read in under 5 minutes.

Reinvest in your business

Even though Andrew makes bank, he doesn’t blow it on the finer things in life 🚗 🏖👔

👉🏽 Instead, he does what savvy traders do: He reinvests in buying more cards that have gone up in value.

📅 When? During the off season, when fewer people are looking for cards.

For example, when the baseball season ends around October, Andrew stocks up on those suckers before spring hits since they’re in lower demand 📉

So, by the time the new season starts up again, he can sell his stockpile from the winter or hold out ‘til he sees how well the players perform 📈

If you’re smart, too (and we think you are), you’ll consider doing the same. That is, using what you earn to reinvest in your business.

Depending on what you do, reinvesting in your biz could include:

Don’t be afraid to take risks

Another pro tip from Andrew? Knowing how to strategically balance safe and risky investments is 🔑

"It is important to always buy some proven players, such as Mike Trout and LeBron James," he said. "Even though such players come at a higher cost, if they do not perform well, their cards will maintain their value due to their previous years of solid production."

Yet, he’s definitely not above taking a chance.

He admitted that even when a player has a bad season, he buys their cards sometimes because he expects them to rebound the following.

Can’t say the same about the nobodies, tho ⚠️

"Investing in not-well-known players can be risky, but the potential to make a lot is really high because the cost to buy in is low."

We just wanna chime in here and say that life is a gamble, and if you’re not willing to win some and lose some, what are you living for? 🤷🏽‍♀️

For us, there’s no such thing as a failure as long as you learned something from it.

Accept it as being part of life 🥰

If you need more of a pep talk, here are 6 ways to be a successful risk taker and take more chances.

Back when Andrew bought his record-breaking Giannis Antetokounmpo card for $40k, can you believe that people thought he was cray cray? 🤪

But because he “had a feeling about Giannis,” he went through with the sale.

“I am so grateful I trusted my instincts … I believe in what I do, and I know that I have a sixth sense for this, yet didn't think I'd get that much.”

But in all seriousness, sometimes you just have a hunch that something will play out in your favor, even if there’s no physical proof.

While doing so can be scary and put you in the hole financially, when you trust intuitive information in a high-validity environment where you’ve had enough practice to learn the patterns, it can pay off.

This whole blog is about the best example of such 😌👆🏽

So, what did you learn?

How would this look for you and your biz?

We don’t know you (yet!), but we’re willing to bet it could go something like this: researching the market, building a minimum viable product (MVP), testing what you’ve created, and capitalizing on the emerging trends, always adapting as needed.

Just a thought 🤷🏽‍♀️ Take it or leave it.

But anyways, if you find our resources and (unsolicited) advice helpful and want more of us, get early access to Boost 😁 It’s the only work platform you need to get more out of your side hustle. You’ll be glad you did.

Thanks for signing up! Check your email for a confirmation message.
Oops! Something went wrong while submitting the form.

Be the first to know when we launch.